Q & A with Author Kelly Irvin ♦ Giveaway, too!

The tagline for this blog is: Where Writers and Readers Connect. It's also a place where writers can connect with other writers. And that's what we're doing today. Author Kelly Irvin is–to me–a new writer, and I'm eager to get to know her and learn about her writing journey. 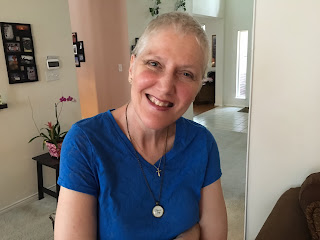 Kelly Irvin is the author of The Saddle Maker’s Son, the third novel in the Amish of Bee County series from Zondervan/HarperCollins. It follows The Beekeeper’s Son, which received a starred review from Publisher’s Weekly, calling it “a delicately woven masterpiece.” She is also the author of the Bliss Creek Amish series and the New Hope Amish series, both from Harvest Housing. She has also penned two romantic suspense novels, A Deadly Wilderness and No Child of Mine.

A former newspaper reporter and public relations professional, Kelly is married to photographer Tim Irvin. They have two children, two grandchildren, and two cats. In her spare time, she likes to read books by her favorite authors.

Hi, Kelly, welcome to Whispers in Purple. So happy to have you drop in for a visit. Let’s chat a while.

Peg: How long have you been writing?

Kelly: All my life, it seems. But I didn’t get serious about writing fiction until I turned forty-five and realized if I didn’t write that novel soon it would be too late. I have a degree in journalism and worked as a newspaper reporter before going into public relations. I got married and had kids and suddenly I was middle-aged. I started writing in grade school and wrote plays, poems, and short stories. In high school I decide to pursue a career in journalism so I could get paid to write. I wrote nonfiction for thirty years before I did what I really wanted to do, which was write fiction.

Peg: Has your writing journey been as you envisioned it? If so, tell us a bit about it. If not, how is it different?

Kelly: It’s been far more rewarding than I could’ve imaged. I didn’t know how hard it would be to get published or I might never have tried in the first place. A little ignorance in this instance might be a good thing! I never imagined I would have success writing Amish romances. I started out writing romantic suspense but couldn’t break into the CBA. My agent challenged me to write an Amish romance and so I gave it a try. She sold the first one before I finished writing it. The rest, as they say, is history. It’s so rewarding to have readers share their love for a particular story or character. It’s amazing to be involved in the process from that first spark of a story idea all the way to seeing that book on the shelf and then hearing readers’ reactions. It’s a job like no other.

Peg: That's for sure! What sparks your creativity when feeling drained?

Kelly: A good night’s sleep usually does the trick. I wake up and the characters are chattering away. Sometimes a shower helps. Doing my exercises. Anything that gives me time to disengage my brain and let my thoughts wander and daydream. A writer needs time to think about nothing at all. Sometimes I sit in my office chair and stare out the windows to the street in front of our house. My husband will walk by and ask what I’m doing. I answer, “Writing.”

Peg: What have you learned recently about yourself, and how has it affected your writing?

Kelly: I learned in January that I have ovarian cancer. I was previously diagnosed in November with primary lateral sclerosis (PLS), which is on the spectrum of ALS (Lou Gehrig’s Disease), but not generally considered fatal. Having both a chronic degenerative disease and a life-threatening disease really cause a person to realize that the time to accomplish goals and reach for dreams isn’t infinite. We might know that intellectually, but we seem to drift along as if we have all the time in the world. I want to make each day count. Make my writing count. Write as much as I can and as often as I can. And as well as I can.

Oh Lord, have mercy! How devastating for you. I have immediately added to my prayer list, Kelly.

Peg: How much of yourself do you put into your books?

Kelly: I believe everything we experience goes into who we are as writers. Our childhoods, our relationships with our parents, our tragedies, our triumphs, our faith, our fears. Those huge life events shape us. A good example is Love Redeemed, a finalist in the 2015 ACFW Carol Awards contest in the romance category. It’s about the loss of a child in a tragedy and the impact it had on her family members. I lost a brother in a boating accident many years ago so I know how devastating it is. I could write from that place. It can be a painful process, but one that reaches readers. You can pour all those feelings into the characters and it feels very real to the readers who see the world through the characters’ eyes. Every page has a piece of me in it. Every word, really. My voice and my world view are represented in each book.

Peg: Do you write in one place or switch off to different locations? Describe your favorite writing place.

Kelly: I’m fortunate to have a dedicated writing space in my home. My office is filled with books and family photos and office supplies and everything I need to make me feel like I’m in my element. But the truth is I can write pretty much anywhere. I retired from my job as a public relations manager for the City of San Antonio at the end of January. Prior to that I had a full time job for twenty-two years. For years I took care of my children and my husband as well. I took my laptop to work early and spent an hour writing in that office before my day started. Then I wrote for an hour at lunch. If I could I might write in the evening as well. I learned to put my fingers on the keys and go, no matter what else might be happening or where I might be. I didn’t have time to be finicky about it!

Peg: Let’s pretend: An anonymous donor has gifted you with a 5-day stay at a place of your choice, and you can bring four other contemporary friends (not family) with you.

A: Where would you go, and why?

Kelly: A writers’ retreat in Amish country, specific location to be determined by the writers as a group. I would love to have the gift of time spent with other writers who are researching and writing in the same genre. We could discuss the challenges, learn from each other, lift each other up, and have fun with each other.

B: Who would you take with you, and why?

Kelly: There’s a group of writers who were all clients at one time or another of my agent, Mary Sue Seymour, who passed away earlier this year. They all got their start with her. Some moved on, but that connection always remains. I respect each one of them and how they have progressed in their writing, working hard to do justice to the Amish way of life and faith. I would invite my fellow Texans Vannetta Chapman and Beth Wiseman as well as Mary Ellis and Amy Clipston. None of us started out writing Amish fiction, but Mary Sue is the common thread in our career. Everyone has written other kinds of fiction, but never abandoning this genre that has been so kind to us. We each bring something a little different to the table and we could learn so much from each other. It would be so much fun!

Peg: Tell us something about your book.

Kelly: The Saddle Maker’s Son is a departure from what you will see in most Amish fiction for a couple of reasons. It takes place in South Texas where the only Amish community exists in the state. Bee County is not far from the Gulf Coast or the Texas-Mexico border, which lends itself to some very different story lines. In this case, I asked the question, what if an Amish woman discovers hiding near the school two young children from El Salvador who’ve entered the country illegally with the wave of unaccompanied minor illegal immigrants who have flooded the border in recent years? How would they handle it? 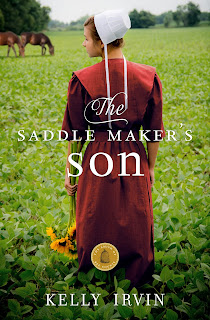 Here’s the back cover blurb:

Rebekah Lantz feels betrayed and abandoned. Tobias Byler is bound by regret. Can two young runaways from a world away teach them the healing power of a true family?

Rebekah isn’t like her sister Leila, but no one seems to believe that. Ever since Leila made a decision that has haunted her family and their small Amish community, Rebekah has been held to a higher standard under her mother’s watchful eye. Boys avoid her. She simply longs for the chance to be a wife and mother like the other girls.

Tobias Byler only wants to escape feelings for a woman he knows he should never have allowed to get close to him. Moving with his family to isolated Bee County, Texas, seemed the best way to leave his mistakes behind. But even a move across the country can’t stop the past from accompanying his every thought.

A surprise encounter with two half-starved runaway children forces both Rebekah and Tobias to turn their focus on others far more desperate.

In doing so, they discover the key to forgetting the past may open the door to the love and the future they both seek.

Peg: Finally, where can readers find you?


♦ About the Giveaway: Kelly is giving away a signed print copy of The Saddle Maker's Son to one reader of this blog post. Entering is easy . . . just leave a comment below, including your contact information . . . so we know how to reach you should you be the winner.

Giveaway ends Tuesday, July 19, at Midnight, cDT. Winner's name will be drawn and notified sometime during the day on Wednesday, the 20th. GOOD LUCK!

Kelly, thank you so much for being my guest today. It’s been a pleasure getting to know you.
Posted by Peggy Blann Phifer at 1:00 AM