In all my years of blogging—10 this year, matter of fact—this is the first time I’ve featured a husband/wife writing team. That's why I’m so excited to have Diane and David Munson here today to spend some time with us in an interview.

So sit back and emjoy!

I’ve been browsing through your website and I’m so intrigued! A former Federal prosecutor and a former NCIS DEA Special Agent. Wow! I hardly know where to begin this interview. But, let’s give it a try . . .

Peg: When did you decide to join forces and start writing what you call ‘factional fiction’? (Love that term) or, as in your banner above: High Velocity Suspense.

D/D: While looking for a diversion from writing legal briefs, Diane penned a Christian historical novel that revealed persecution of a Dutch family who owned the first Bible printed by Johann Gutenberg in the Middle Ages. She floated to acquisition editors just after 9/11/2001, and they liked the manuscript; however, they admitted demand for historical was waning. Readers were beginning to read more suspense. Upon learning that Diane was an attorney, a former Federal prosecutor, and married to a former NCIS agent and undercover DEA agent, these acquisition editors suggested Diane and David collaborate to write a suspense novel. Diane pitched the idea to David, who had also spent his career writing lots of investigative reports, which many defense attorneys claimed were fiction while defending their clients before judges.

David saw the possibility as a challenge and the two of us spent the next months writing our first novel, “Facing Justice,” which is inspired by one of David’s cases where he investigated someone he knew. We presented “Facing Justice” to FaithWalk Publishing, and three weeks later we were offered our first contract. What happened to the historical fiction? In a fun twist, we later pared it down and included in a modern day suspense that returns to the fifteenth century to decipher the mystery in our ninth thriller, “Embers of Courage.” We have written two other thrillers with touches of history to resolve a modern day mystery. These are “Stolen Legacy” and “The Camelot Conspiracy.”


Peg: How do the two of you handle the dual writing roles?

D/D: It was more complex for our first novel, which we completely outlined. We’ve developed a beautiful harmony as co-authors through the years. Once we discuss a possible plot, then we agree on the characters and their hopes and conflicts, the setting, and the plot. Once we’ve agreed on the basics, Diane begins writing the first chapter. David begins at the end and writes backwards, until we meet in the middle. Then we are done. Not really. We are just kidding. We really divide up the writing task into various scenes. If David were to write the entire novel, he would pen all action and no romance. Once Diane explained the majority of readers are women that enjoy hints of lighthearted romance, we season our thrillers with appropriate romance mostly written by Diane. If the scene involves surveillance, an arrest or an undercover sting, most likely David wrote it based on the many aspects of his exciting and dangerous career. Diane makes a final pass through the manuscript to ensure a uniform voice. We take our writing seriously as we want to bring glory to God with each story.


Peg: I’m always curious about writers’ work spaces. Tell us about yours.

D/D: We both write on laptop computers. Our work space looks much like your living room. We have a folder with miscellaneous notes. We sit on recliners and type. If the doorbell rings, it takes thirty seconds for us to collapse and stow our computers and we are ready to entertain guests. Although we can easily check our Google maps online, we have the bookshelves stocked with dictionaries, an encyclopedia of world history, and illustrated world atlas. We also keep nearby our Bibles, concordance, and other Christian materials to help us construct the faith elements of our thrillers.  Outside the windows where we work are many beautiful flowering plants reminding us of God’s creation, which is one source of inspiration as is God’s Word. Many Bible verses decorate our walls.


Peg: The list of your books already published is impressive. I’d love to read them all, but will have to add them one-by-one to my wish list. Your latest/upcoming book The Looming Storm. Let’s talk about that. 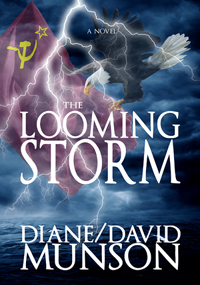 D/D: As trouble and trials seem to abound in this country and around the world, we were lead to write a thriller with Jesus at the center of the storm bringing calm and peace as He did with the disciples in Mark 4:35-41. In The Looming Storm we reveal some of the techniques David used in his undercover cases against smuggling cartels as a former Federal Agent. Readers will discover how tomorrow’s headlines leap from the pages when Federal Agent Eva Montanna uncovers a menacing threat to harm Eva and her family.  Daughter Kaley’s trip to Eastern Europe with her high school class puts the entire family in danger and alters their lives in the blink of an eye. Eva’s faith is stretched as she and Griff Topping, her FBI partner, use every trick to infiltrate a band of Florida smugglers. The agents are shocked when their undercover charade reveals the criminals have sinister plans for America. Secrets are shredded, and in this our tenth ‘stand alone’ thriller, we rip the veil from a labyrinth of covert criminal enterprises in a surprising and family friendly way!

Peg: This is probably an unfair question, but . . . which of all your books is your favorite?

D/D: David’s favorite is The Looming Storm probably because it is based much on his undercover cases. David also recommends for female readers Hero’s Ransom because it features a grandmother, daughter, and grandson, plus it is inspired by one of Diane’s family law court cases, and has a happy ending. Besides The Looming Storm, Diane’s other favorite is Embers of Courage as in this one we highlight persecution of Coptic Christians happening today as well as persecution of Christians in the Middle Ages who receive the first printed Bible, all against a backdrop of our federal agent Eva Montanna’s family legacy. We are both deeply concerned and pray for the persecuted church.


Peg: I saw on your website that you wrote the story about the arrest of the Johnny Depp movie character in Chicago. Which book was that? Maybe I should start my reading adventure with that one J

D/D: You are referring to an incident that Diane used to convince David to join her in writing what we call ‘factional fiction.’ When a successful drug dealer wrote an autobiography, which was published as Blow, it became a movie wherein Johnny Depp played the part of the drug dealer. David was offended because the book and movie contained falsehoods. David knew this because he arrested Depp’s character in the Chicago Playboy Club. As portrayed in the movie, after the Depp character was released from prison, he returned to drug dealing with Colombian cartels and when Depp’s character was arrested again years later, David arrested some of the dealers working with him.


Peg: Do you have another book in the works after The Looming Storm?

D/D: We both had a laugh when we saw this question. It takes us about a year to research, write, edit, and support each new release with event appearances. Yet, it takes a reader anywhere from two to seven days to read our newest release. So, about a week after we release a new book, we begin to get this question. The answer is yes. We are hard at work creating a new idea with lots of twists, which will feature the return of Eva Montanna, our Federal agent who is also a wife and mom, and her partner, FBI agent Griff Topping. These two characters and their families return in all our novels, and for that reason we call them ‘companion books’. Each book stands alone. They are not a series; however, the characters do reappear and Eva and Griff will be in number eleven.

D/D: Readers can check us out on our website at www.dianeanddavidmunson.com.  They can sign up for our email newsletter (that goes out three times a year) where we feature our appearances and events. We also critique the main NCIS TV show each week at our NCIS blog, because David was an NCIS agent just like Leroy Jethro Gibbs. That is the number one question we receive: Is the show realistic? Check out our blog to learn the answer!

D/D: Thank you for having us on your blog. Blessings to you and your readers!


Peg: Thank you both so much for being my guests! It’s been fascinating and I’d love to have you return some day.

Posted by Peggy Blann Phifer at 1:00 AM