A Peek Into a Story's Birth ♦ Johnnie Alexander

What Hope Remembers: The Story Behind the Story
By
Johnnie Alexander 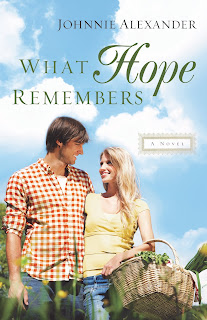 “You might say this is an unexpected story. For years I dreamed of telling Shelby and AJ’s story, and I hoped to tell Brett’s too. But I never expected, never thought, never ever considered telling Amy’s.”

The above is the first paragraph of the novel’s Acknowledgements section for What Hope Remembers, the third story in the Misty Willow Series.

As you can see, I didn’t think much of Amy as the heroine of her own story. She appeared in the first two stories as a vengeful, self-absorbed brat. A perfect villain, yes. But an engaging heroine?

Thankfully, three close friends and my daughter thought otherwise. They wanted to hear Amy’s story, and they wanted her to have a chance at happiness. I talked about the possibilities with my editor, she gave her go-ahead, and I—still with a bit of reluctance—opened my heart to a troubled and unkind woman trapped by the choices she’d made in the past.

Here’s the secret about villains: they believe they are the heroes of their own stories.

Amy was no different.

She had a voice. She only needed someone to listen.

I thought I knew the pain that crippled her spirit. As readers of Where She Belongs (with AJ and Shelby) and When Love Arrives (with Brett and Dani) know, Amy and Brett’s parents and their cousin AJ’s parents died in an airplane crash when they were all in their teens. This tragic accident devastated each of them.

But I didn’t know until I started writing this story that the crushing pain caused thirteen-year-old Amy to give up her love of riding horses and her love for Gabe Kendall, the stable owner’s nephew.

Years later Gabe comes riding back into Amy’s life on a buckskin mare. He’s also trapped by the past, but together—and by God’s grace—they might be able to create a new future.


I’m grateful for wise friends who cared about Amy even when she was at her most unlovable. And I’m thrilled her story has now been told.

From the Back Cover:

When Amy Somers loses her job as a lobbyist, she moves to Misty Willow, well aware that she’s crossing bridges she’d burned years before. With all the mistakes she’s made and the uncaring things she’s done–even to her own family–she can hardly believe that happiness will find her, especially when Gabe Kendall, her first crush and her first kiss, rides back into her life atop a buckskin mare.

A former Marine, Gabe is at loose ends after serving a prison sentence for being in the wrong place at the wrong time. He sees beyond Amy’s hard exterior to the girl he once knew and loved, and he longs to see her open her heart. Yet with his vision clouded by shame for his past and fears about the future, he finds it difficult to see the path ahead.

But the memory of that long-ago kiss just may have the power to reignite a romance that brings out the best in both of them. 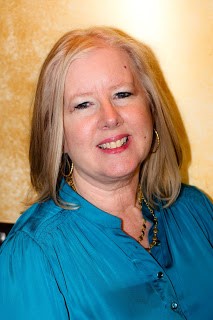 Johnnie Alexander is a wannabe vagabond with a heart for making memories. While relaxing on her Sunshine State patio with her dogs Rugby and Griff, she writes stories that tug at your heartstrings.

In addition to winning the prestigious American Christian Fiction Writers (ACFW) Genesis Contest (Historical), Johnnie has received several conference awards. Her popular debut novel, Where Treasure Hides, is a CBA bestseller and has been translated into Dutch and Norwegian.

She is marketing director for the Mid-South Christian Writers Conference and past president of both the ACFW Memphis and ACFW Central Florida chapters.

Where to Find Johnnie Online

Posted by Peggy Blann Phifer at 2:00 AM

Email ThisBlogThis!Share to TwitterShare to FacebookShare to Pinterest
Labels: behind the story, inspirational romance, Johnnie Alexander, What Hope Remembers, Whispers in Purple