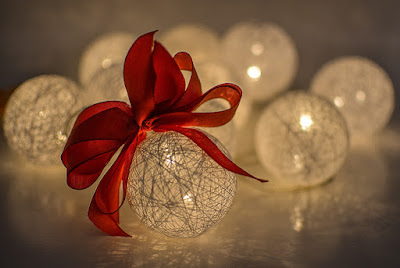 It doesn't seem that long ago, but it's been almost two years since I moved from Brooklyn (NYC) to the north-eastern Florida coast. I relocated from a large house to a much smaller one. I moved everything that had personal history, furniture, art-work, what-nots. The same can be said for my Christmas decorations.

I don't hang either my grandmother's or my parents' ornaments on the tree but rather show them in my china cabinet. I have cats and am leery of breakage.

"Honor your father and mother," which is the first commandment with promise. ~ Ephesians 6:2 [NKJV]

Some time last week, my daughter Victoria phoned from Brooklyn, asking where we had obtained our decorated, fresh wreath. Each year, about two weeks before Christmas (when it was cold enough so the wreath would last and not loose needles) my husband Joseph, myself, and our three girls piled into the car to get our wreath. After we found the perfect one to decorate our porch railing, we'd stop at an abfab real Italian pizza parlor (not a chain) and have a merry-eating time. Many large cities in cold climates have tree vendors setting up shop on well-traveled streets where they display cut, fresh trees and decorated wreaths. I told Vicky the street corner in Brooklyn where we always got our wreath. She will be going to get her wreath about two weeks before Christmas to carry on the family tradition.

Joseph has been gone one year. I still carry on family traditions. I also make new traditions for myself with my Christian gal-pals. Lynn and Deborah, are in my immediate posse. We three frequently lunch, roam fresh markets, thrift shops and/or malls, eat at each other's houses where we watch Hallmark movies. We are part of a loosely organized group in our town where 6 - 12 of us get together once a month to dine and/or do something. This month we're going to the historical society's Gingerbread House Extravaganza and then to Jimmy Johns for a bite to eat. Quite a number of the women are employed in one capacity or another by Trinity College. So, I state uncategorically, it's an interesting group. And so, I'm moving forward, always forward.

"A man who has friends must himself be friendly, But there is a friend who sticks closer than a brother." ~ Proverbs 18:24 [NKJV]

BLOOD SPEAKS, in a nut shell… 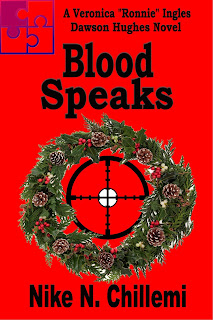 Veronica "Ronnie" Ingels, Brooklyn gal PI, waited a long time for the solitaire on her finger. When her sometimes boss, a shadowy figure and director of a secret government organization, offers a one-week bridal shopping vacay in Maryland, she jumps at it.

Joined by bridesmaids, Sandra Daube and Bertha Dagney, Ronnie sets off for the village of Heritage Cove on Arrowhead Lake, Maryland. Their joyous stay at the rustic yet luxury Heritage Cove Inn is shattered by a murder with tendrils and a clandestine motive stretching back to the assassination of John Fitzgerald Kennedy.

It doesn't take long for Ronnie and her gal-pals to become targets of the killer. It goes without saying, Taylor County Deputy Sheriff, Lieutenant Dawson Hughes leaves Texas to protect his bride-to-be. He's joined by Sandra's employer, conservative political activist Ben Cohen. No obstacle can keep Gabby Hayes look-alike Hoot Dagney from the side of Bertha, his new bride. 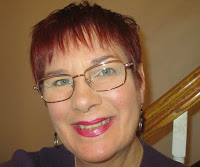 Like so many writers, Nike Chillemi started at a very young age. Her first major work was a Crayola, fully illustrated book she penned as a little girl (colored might be more accurate) about her then off-the-chart love of horses. Today, you might call her a crime fictionista with a humorous side. Her passion is crime fiction. She likes her bad guys really bad and her good guys smarter and better.
Nike is the founding board member of the Grace Awards and its Chair, a reader's choice awards for excellence in Christian fiction. She has been a judge in the 2011, 2012, 2013, 2014, and 2016 Carol Awards in the suspense, mystery, and romantic suspense categories; and an Inspy Awards 2010 judge in the Suspense/Thriller/Mystery category. Her four-novel Sanctuary Point series (out of print), set in the mid-1940s has finaled, won an award, and garnered critical acclaim. The first novel in the Veronica "Ronnie" Ingels/Dawson Hughes series HARMRUL INTENT won in the Grace Awards 2014 Mystery/Romantic Suspense/Thriller/Historical Suspense category. She has written book reviews for The Christian Pulse online magazine. She is a member of American Christian Fiction Writers (ACFW) and John 3:16 Marketing Network.
http://nikechillemi.wordpress.com/

Posted by Peggy Blann Phifer at 3:00 AM