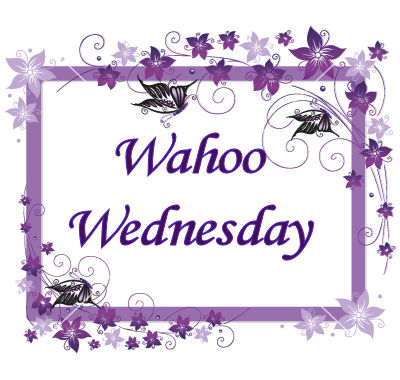 Hello everyone. My name is Carol Nemeth. It’s a pleasure to be here on Whispers in Purple with Peggy to share my newest release, Ocean of Fear, Faith in the Parks, Book 3. All the books in this series are set in national parks and this one, in particular, takes place at Cape Hatteras National Seashore.

My husband and I visited the Cape two Septembers ago to do the research for this book as well as for A Beacon of Love: Prequel to Ocean of Fear, which takes place in 1928 during prohibition.

As we traveled toward the Cape in our RV, hurricane Maria came storming in from the South Atlantic. We were forced to wait a few hours inland while she battered the island and tossed sand everywhere. Four days later and well into my husband’s vacation time from work, they finally opened the Oregon Inlet bridge, and we headed to Cape Hatteras. They were still sweeping up sand but we made our way to the campground and hit the ground running to begin research. Our eight days at the Cape turned into four days. I had researched places ahead of time online, but not everything worked out for us. However, the Lord had a better plan. We went to the Hatteras Village Library and the librarian there gave us a couple places to go, and those places told us of other places, and we met this person who told us of another person, etc. etc. Before we knew it, I had more information than I could use in both books.

I’m one of those authors who likes to use family member’s or pet’s names in my books. I’ve done both. Several times. In A Beacon of Love: Prequel to Ocean of Fear, the sheriff and his sister, the heroine, are named after my oldest grandchildren, Martin and Ava who are brother and sister. In Ocean of Fear, I named the hero after their younger brother, Gage.
The reason I decided to write these NPS stories is two-fold. A few years before I met my husband, I worked for the National Park Service at the Great Smoky Mountains National Park. The best job ever (until I got published, that is). I loved my job. Through the years I’ve traveled to various parks, and I’m thankful for the vision of those who set aside land to protect it so that generations of people can enjoy it. Secondly, I want to share my love of those parks, and the God who created the beauty that we see around us. Not only that beauty but the love He has for us and the salvation that His precious Son died on the cross to secure for us so we can spend eternity with Him.

Another interesting bit of “family” info, on book 2 in the series, Canyon of Death, my daughter, Jennifer, appears on the cover and is dressed in my old uniform. I love having her on the cover. She’s beautiful and it’s very personal. On the cover of Ocean of Fear, the young lady is a friend of my daughter and my son-in-law, and she serves in the West Virginia Air National Guard. She is also wearing my old uniform. (I’m glad to say, I can also still wear it, too.)

The Faith in the Parks series are all romantic suspense and there are still more to come. I’m currently working on Book 4 which takes place in Denali National Park in Alaska. Book 5 will take place at Gettysburg National Battlefield. I hope you’ll look for Book 1, Mountain of Peril, and start at the beginning.
You just never know where you might see me. Or which park you might spot me at. I’m headed to Denali for my second research trip at the end of June. I can’t wait! 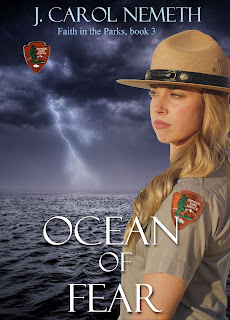 Back cover blurb:
National Park Service biologist Ruth Campbell discovers a body on the beach near Cape Hatteras Lighthouse. Her life shifts out of her comfort zone, but not nearly as much as when the newest park policeman, attractive Gage Hampton, arrives to take her statement. She’s determined to stay as far from him as possible. Scarred by her past, Ruth attempts to avoid young men, but she realizes that avoiding Gage Hampton will be harder than she thought.

Another body washes up with the surf, and Gage is intent on discovering who the killer is. When Ruth’s uncle, Owen Lawrence, arrives searching for a long-lost treasure, both Gage and Ruth find themselves pulled into the search, and things become sinister as the killer grows desperate. Can they find the treasure before the killer does? Or will he silence them and sail away with the treasure too? 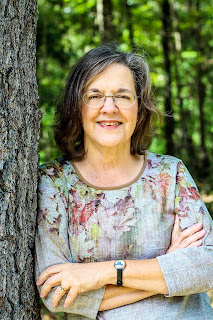 A native North Carolinian, J. Carol Nemeth has always loved reading and enjoyed making up stories ever since junior high school, most based in the places she has lived or traveled to. She worked in the National Park Service as a Park Aid and served in the US Army where she was stationed in Italy, traveling to over thirteen countries while there. She met the love of her life, Mark Nemeth, also an Army veteran, while stationed in Italy. After they married, they lived in various locations, including North Yorkshire, England. They now live in West Virginia, where, in their spare time, Carol and Mark enjoy RVing, sightseeing and are active in their church. They have a son, Matt, who is Army Special Forces and a daughter, Jennifer, her husband Flint, who serves in the Air Force, and three grandchildren, Martin, Ava and Gage. Their four-footed kid is pretty special too. Holly, a black Lab loves traveling in their RV, and when they pack up to go, she’s waiting inside for them to head out.

·       Monthly newsletter signup through my webpage or my Facebook Author page

Thanks for stopping by Whispers in Purple! And thank you, Peggy, for allowing me to spend time with you today! To God be the glory!