The Year I Forgot Christmas

An Israeli Christmas
by Deborah Hemstreet

I first came to Israel in 1982 at the age of 27 years. It was the first time I had lived overseas. I was immediately immersed in a new world. I was also living in the Middle East, in a culture that was and is forming its own unique identity—an amalgamation of cultures from East and West thrown into a stew beyond my comprehension.

I was the odd one out, a Messianic Jew who was frequently told that I wasn’t really Jewish because my father was Jewish, not my mother, and because of my absurd belief in a Messiah that no good Jew could possibly believe in. Even the Jewish Christian community where I lived in Tiberias didn’t know what to do with me. I didn’t fit into anyone’s box of stereotypes. I had not been brought up with a “Jewish complex” as I call it. My identity as a believer in Jesus was just that. Jesus first, Jewish second.

Learning a new language that forced me to read from right to left was a real challenge—I am severely directionally challenged. I still get horizontal and vertical mixed up! I was a visiting nurse caring for elderly people who had given up far more than I had for the privilege of living in a holy land, where I was more aware of holes in the logic of faith than of holiness lived out by the Chosen People or the Body of Messiah.

This was a land where seasons were marked by rains and winters that seemed more like spring, and where the thirsty land cried out for those precious life-giving drops.

I didn’t look at my English calendar much. The days, weeks, and months were measured around the Sabbath and Jewish holidays. Time flew and suddenly I was surrounded by the wonder of my first Hanukkah—the Feast of Dedication—in Israel.

Hence, my surprise when late in December—the 24th to be specific—I entered the home of friends and saw—of all things—a Christmas tree. I’d completely forgotten about Christmas. My friends thought that was insane… how could I have forgotten? But I had. Without the external trappings to surround me, and with no familiar songs filling my heart, somehow Christmas had just plain slipped my mind.

That could never have happened in the Haifa of 2016 where I now live. Haifa is proud of its reputation for tolerance and diversity. Everyone accepts each other. Jews, Christians, and Muslims live together in peace, even, for the most part, Jewish believers in Jesus. In Haifa we celebrate the Holiday of Holidays, where Christmas, Hanukkah, and the Feast of the Sacrifice, and sometimes Ramadan, converge for a December festival. People from all over Israel come to visit and enjoy the holidays. Holidays—not holy days.

Over the years, I’ve learned to separate the holiday from the holy day. The day Jesus was born, based on the weather in Israel in December, was most likely NOT December. Shepherds would not be out in the fields in December when winter rains are almost guaranteed—except in time of drought—and when the cold is a certainty near Bethlehem—possibly even snow!

In my heart I miss the holiday of my childhood. Putting up the tree with my parents, going to a midnight Christmas Carol service, coming home, opening gifts, watching A Christmas Carol… the holidays speaks to my heart of tradition, family, joy, giving, and sorrow for days now past.

But the Holy Day? That day is celebrated in my heart every time I take the bread and wine and remember that the importance of Jesus’ birth rests in His death and resurrection. He is Risen—He is risen indeed. And that could never have happened if He had never been born.

Christians all to often argue about this holiday until I want to scream. Pagan holiday vs holy day and some avoid singing the Christmas Carols at all costs. I’m one of those weird ones who plays Christmas Carols all year round and wish we could stop arguing and start living. Christmas has become secularized. It will become more so. Why should we be surprised? We live in a world that is increasingly hating truth and light and truly holy days. Holidays are fine—but holy days?

But if we make every day a holy day the world cannot rob us, and we can enjoy the holiday. And when the family, trees, gifts, and carols are memories past, no one can take the Holy Day from us, because Jesus is in our hearts!

That is Christmas for me. May these thoughts encourage and bless you as this season fades into a New Year, and may the birth of Jesus be a joy to your heart every day, because He is risen—He is risen indeed! 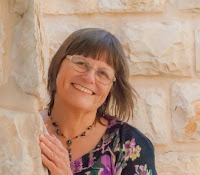 Deborah Hemstreet writes under her pen name, “Dvora Elisheva.” Her father was a Jewish believer in Jesus (Yeshua in Hebrew), her mother was a non-Jewish believer. Deborah likes to identify herself as a follower of Jesus—with no denominational affiliation other than a member of the Body of Christ.
Professionally, Deborah has been a nurse (LPN), and holds a BA in Special Education and an MA in Technical Communication. Currently she is the English Communications Specialist at Rambam Hospital in Haifa, Israel—the largest hospital in northern Israel. She is actively involved in representing the hospital to the Christian community. She also teaches English using the Bible as a textbook in an Israeli Chinese Church and is a member of the worship team in her Messianic congregation in Haifa.
Deborah came to Israel in 1982, and other than for a brief period of time (2007–2011) has lived there ever since. She married for the first time in 2007 and relocated to the USA, she thought forever. However, God had different plans and in 2010 her husband Rich died, and in 2011 she returned to Israel to live.
Her autobiography, Connecting the Dots of a Disconnected Life: Hope for a Fractured Soul was recently published and is available on Amazon.
Find Deborah / Dvora on the Internet:
·                  Author Website: DvoraElisheva.com
·                  Blog: hope-challenged.com
·                  Email: de@DvoraElisheva.com
·                  Facebook: https://www.facebook.com/DvoraElisheva
·                  Twitter (I don’t tweet much though): @DvoraElisheva (https://twitter.com/DvoraElisheva)
Posted by Peggy Blann Phifer at 1:00 AM