Assuming the Worst: Finding the Best

I would leave New York after living there my entire life. As a thoroughbred Yankee, I understood the vast differences moving to Tennessee would involve. After all, as a young child, I yearned to ride with the freedom riders. They lived in the South. Tennessee’s coordinates placed it in the South.
As a hippie, I watched Easy Rider. Back then, I couldn’t dream of leaving the progressive North.

Then I saw Deliverance. Need I say more?

However, with maturity (we don’t say advancing age), moving to Tennessee became advisable and desirable. My writing friend Cathy became excited about my relocation and writing a novel exploring the vast differences between the North and the South. Her idea had merit.
Then I moved here.

My notions dissipated like the smoke from a barbeque. The people here were kind and liked New Yorkers. No one saw me as an intruder. They shopped at the same stores and attended churches similar to mine back in the northern latitudes. They served on Habitat for Humanity or the Lions’ Club. They wrote books, gardened and helped their neighbors. I visited schools as a clinical supervisor and found progressive, dedicated teachers, and students who learned advanced curriculum.
Except for the hill dialect, cornbread and a culture of Christianity as opposed to a culture of agnosticism, no differences existed. I had no story.

While I ignored her command, I explored our area.

A quaint town with a horrid name lay a few miles to the north of my new home. Friends took me to Stinking Creek, a quiet hamlet of doublewides and stone houses. We drove down back roads where no homes existed and the theme of my book took root.

Assumptions.
They never tell the truth.

With a theme established, my story always develops.

A New York Yankee on Stinking Creek depicts two women with diametrically opposed philosophies. They are each other’s only neighbors and only help. One, an atheist abstract artist is wrenched from Manhattan. The other, a staunch conservative, never left Stinking Creek.

Both assume the worst of the other.

And we all know assumptions lie.

Nothing’s as it seems on Stinking Creek.

And if we judge and never check the facts, we will live a lie.


As humans, it’s easiest to see the speck in our neighbor’s eye and not the log in ours. Let us be like my two characters and learn assumptions make fools of us. 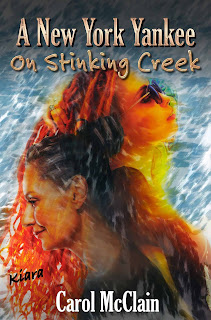 NOTHING GOOD COMES FROM STINKING CREEK
Alone, again, after the death of her fiancé, abstract artist Kiara Rafferty finds herself on Stinking Creek, Tennessee. She wants out of this hillbilly backwater, where hicks speak an unknown language masquerading as English. Isolated, if she doesn't count the snakes and termites infesting her cabin, only a one-way ticket home to Manhattan would solve her problems.

Alone in a demanding crowd, Delia Mae McGuffey lives for God, her husband, her family, and the congregation of her husband's church. Stifled by rules, this pastor's wife walks a fine line of perfection, trying to please them all. Now an atheist Yankee, who moved in across the road, needs her, too.

Two women. Two problems. Each holds the key to the other's freedom. 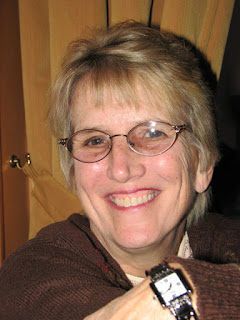 Author Carol McClain is an eclectic artist and author. Her interests vary as much as the Tennessee weather—running, bassoons, jazz, stained glass and, of course, writing. She’s a transplant from New York who now lives in the hills of East Tennessee with her husband and overactive Springer spaniel.
She is the president of ACFW Knoxville and the secretary of the Authors’ Guild of Tennessee.

The world in East Tennessee intrigues her from the friendly neighbors to the beautiful hiking trails and the myriad wildlife.


Life is good in here.

Find out more about Carol on her website at:
http://www.carolmcclain.com/

GIVEAWAY: Carol is offering to give away one free eBook copy of A New York Yankee on Stinking Creek to one reader of this blog who leaves a comment (with contact information) below and answers this fun (optional) question: Have you ever assumed something that turned out to be something entirely the opposite of what you'd thought? Do share, but have fun with this. No need to embarrass yourself ... and answering is optional. All who comment will be entered in the drawing.

Giveaway ends one week from today on Wednesday, August 14, at Midnight O'Clock, Central time. Winner chosen through random.org on Thursday, Aug 15 and notified via email.