"Reluctant to Wed" ~ Anneliese Dalaba ~ Behind the story


Meet author Anneliese Dalaba and read about the Story Behind the Story of her book Reluctant to Wed. Welcome, Anneliese!

On my wedding day, I entered full-time ministry alongside my husband who was already a pastor. I felt as though I had boarded a moving train unaware of its destination. There were times we stepped off one train to quickly get on another, still unaware of where it would lead us. I was okay with the mystery as long as my love was beside me. He took me on a grand adventure and we had two children along the way. There were highs and lows, but we clasped hands and faced every situation together.

Three years ago, my husband’s job changed when he was elected into a district-level position. Changing trains again, I suddenly realized there was much less for me to do. My children were married and my nest was empty. My husband no longer had a pastorate, so there were no Bible studies to teach or women’s groups to lead. The time had come to pursue my dream.

Pulling out my computer, I began typing my first novel. I wasn’t sure which time period I would choose, but I knew it would be a historical romance. I always loved marriages of convenience. Whenever I’d imagined writing a novel, it was a pioneer or western romance. Since I live in the US, I figured I’d have more information at my fingertips. However, as the story began taking shape in my mind, a romance during the Regency period in England developed. Since I understand the mentality of Americans, being one myself, I decided the heroine should at least have grown up in the States. Therefore, Emma is an American who moves to England to marry Devon, a British lord. You will have to read the story to see how that is even possible.

I loved writing Emma’s story. She is unpretentious and embraces new challenges with optimism, trying to find good in every situation. She’s sincere in her faith, sometimes struggling, but always grabbing hold of the truth of God’s Word. Emma has a wonderful relationship with her mother, and I loved writing the letters she wrote to her mom.

Devon is a proud aristocrat, yet he has a soft spot—he longs for love, although he would not easily admit to it. His home life was cold in comparison to Emma’s and he cannot imagine finding joy in marriage. Add to that a friend, Fitz, who gives him bad advice, as well as a conniving lady friend whose goal is to climb the social ladder on the shoulders of another rich husband. Devon has looked out for the best interest of this friend and her son since the death of her husband, his closest friend, even contemplating marrying her, until he was forced into an arranged marriage with Emma.

In the midst of Devon’s fears and in spite of the barrier he tries to maintain, his heart seems to have a will of its own. Emma is different than any lady he has met before. She is forthright and direct, kind and not manipulative. He enjoys bantering with her and finds his defenses crumbling. Just when Emma sees a happy ever after in sight, something unexpected happens that challenges even an optimist to find hope.

I didn’t have an in-depth outline before I began typing. The story developed as I allowed the characters to tell their stories. It was fun. It was hard. It was exhilarating, yet I wanted to pull my hair out at times. But I never doubted that I would do it all over again.  My second novel will be published later this year.

About Reluctant To Wed: 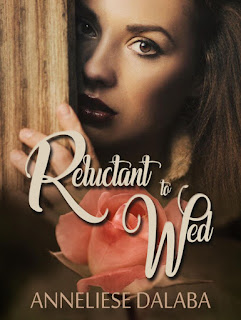 To keep her parents from losing their farm in Pennsylvania, Emma agrees to travel to England and accept her grandfather's offer to arrange a marriage for her with the Earl of Devonport. She secretly hopes a marriage to this stranger will lead to love.


To honor his father, Devon reluctantly agrees to marry Emma, but determines to keep her at arm's length. A marriage of convenience is satisfactory to the earl who wants no emotional ties. He needs an heir, but he refuses to bow to the whims and demands of a wife. He would prefer simply to provide a home and a generous allowance for her, but continue to enjoy his freedom.

Emma’s straightforward and unpretentious manner draws Devon’s admiration. Unfortunately, long-held fears are not easily overcome. Emma finds herself falling in love with him, but she’s afraid of being in love alone. Can a mutual love develop and grow in this arranged marriage? When all hope seems lost, Emma must learn to trust God even if it means letting go of her dreams.


Where to find Anneliese:

Posted by Peggy Blann Phifer at 4:00 AM

Email ThisBlogThis!Share to TwitterShare to FacebookShare to Pinterest
Labels: Anneliese Dalaba, behind the story, historical romance, Regency, Reluctant to Wed