Behind The Hymn/Song ♦ Lucy Adams 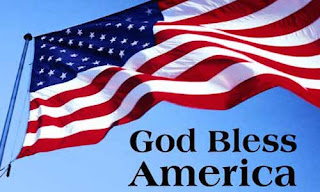 Throughout the year it is a joy to sing this lovely song.  From January to December there are various celebrations in which it is used.  July 4th with the bright fireworks, our beautiful flags and our voices singing ,bring back memories of fun and fellowship.  Now we are singing it as we anticipate new presidential leadership in America.  Our great country is built on prayers from our past,  for our present and our  future.  That is what has made America such a powerful nation.

During the happy times we can also remember the dark times, when we have sung this with voices of sadness.  Through tears, we prayed that God would "stand beside us and guide us through the night, with His light, from above."

One such time was September 11, 2001.  Nothing went as planned that day. We sat frozen in horror before our television sets and saw destruction like we had not ever seen in our beloved land.  But hearts were comforted as we came together with love and compassion.  This song was sung by thousands and it was an appropriate response to such sadness in our country.

The amazing thing about "God Bless America" is that it was composed by Irving Berlin for a Broadway play in New York City.  After it was written in 1918, it was replaced by another.  Filing it away, Berlin thought, "there may be some other time when that song will be needed."

Years later, he retrieved the old song he had written twenty years earlier.  He rearranged the lyrics, wrote the beautiful melody and "God Bless America" was born in 1938 to a very receptive audience - our whole country!

Berlin was a gift to America.  He was born in 1888 in Russia, and his family came to this country at the turn of the century.  He became an American citizen and wrote hundreds of unforgettable songs.  Evidence of his devotion for his adopted homeland can be found in this song of prayer.  Millions of Americans continue to sing about the "land that I love."

The popular vocalist of that day, Kate Smith, agreed to sing it.  She introduced it to America on Nov. 11, 1938 and her dynamic voice carried it with great enthusiasm.  The rest of the story is well known history to the people who heard her on stage or on radio.  She never ended a performance without singing her trademark song, "God Bless America."

Now, watch and hear the American songstress as she performs this wonderful song for the first time:

We give praise for our great heritage and God's promise in Psalm 33:12, "Blessed be the nation whose God is the Lord."